In the 38th joined meeting of the CIDOC CRM SIG and ISO/TC46/SC4/WG9 and the 31st FRBR - CIDOC CRM Harmonization meeting and  within the framework of the issue 309, the crm - sig decided that a guideline must be written  about the case of  someone using an extension  would like to reduce to  CRM base model. The sig assigned to CEO to write this guideline and assigned to CEO and Gerald to make the appropriate adjustments for all CRM extensions. In addition, the sig decided to open a new issue for these guidelines.

Our apologies that the sense of issue 336 came out garbled.

Extensions of the CRM may declare a superclass A of a class B in "CRMbase" or another extension. It may be the case that a property p of B also holds for the new class A. This is to be understood as the effect of widening the scope of CRMbase to that of the new extension, which then comprises domains in which p not only holds for B but also for A. Taken on its own, CRMbase should not be affected by that extension of scope, since it is not concerned with A. This construct is necessary for an effective
modular management of ontologies, but is not possible with the current way RDF/OWL treats it.
We need a logical theory for that and an implementation. The logical theory must describe the scope of CRMbase and that of the extensions in terms of logic (e.g., as sets).

The issue is resolved:

Martin, Carlos and i have had a long email exchange on the topic, see a summary below. We  need an understandable syntax and a sort term for the phenomenon for the readers of the standard.  I suggest we put  an entry in the term listof CRM or extend the one for sub/super property.

To sum up what we seems to agree on: Assume, as you write, we study a part of the reality/world W and formulate a conceptualisation/ontology O for a given purpose. We then extend our focus from W to W’ and formulate an extension of O’ such that O’ union O is a conceptualization/ontology for W’.  Assume  in O P:A<->B. I O’ union O we extend P to P’ such that P:A’ <-> B’ where A’ and B’ are superclasses of A and B respectively in O’.

Martin: “We can regard the property P, originally declared in W, to extend into W' as you describe below. “

Martin: The point is, that we regard P not different from P' in its semantics, we only find out that it has a wider applicability, than anticipated restricting ourselves to W'.

As I understand the issue we need a syntax for restricting the subclass definition in FOL to ensure that P and P’ are identical when P’ is restricted to A and B:
Ordinary sub propery:
P (x,y) ⊃ A(x)
P(x,y) ⊃ B(y)
P(x,y) ⊃ P’(x,y)

In the 39th joined meeting of the CIDOC CRM SIG and ISO/TC46/SC4/WG9 and the 32nd FRBR - CIDOC CRM Harmonization meeting, CEO presented the solution and Martin the problem. Both of them  drew the following figures on the flipchart. 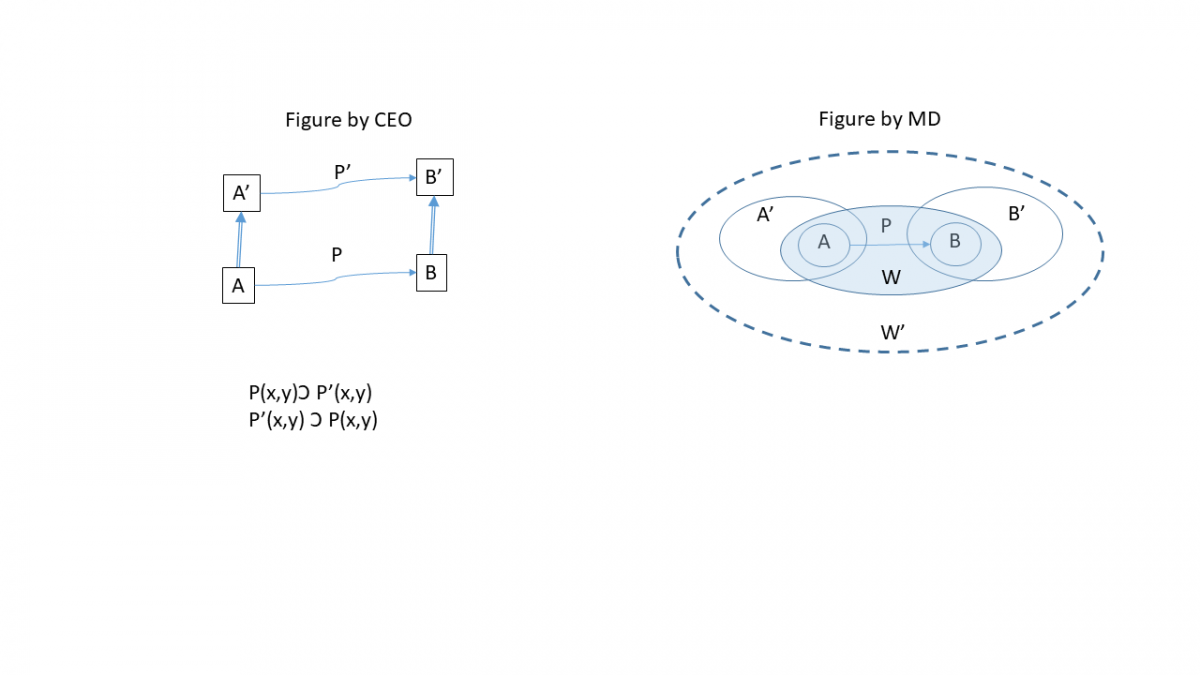 Then sig decided that we need a text and explanation diagram to be appear in super properties in terminology section. The text will be written by CEO, and Korina will make  the graphics  by the next meeting.

Dear all
Here is a first draft for the text. I realised that this is very similar to what is called conservative extention of a theory in logic.

Please comment and see if we can use the text as a draft.

CRMbase (or an extention of it)  may be extended by declaring subclasses of existing classes as well as superclasses.   In the former case all properties of the CRM class will hold for the subclasses. In the latter case the scope CRMbase  will be extended and a property of the CRMbase class may hold for the new superclass but not necessarily. In the case  a property p of a class A also holds for a new superclass B it should be a conservative extension. That is, when restricted to the original class the extended property, p’, is identical to the original property p. In general  a superproperty is said to be a conservative extension of a subproperty when it is identical to the sub property when restricted to its domain an range.

Taken on its own, CRMbase is not affected by such an conservative  extension of scope, since it is not concerned with A. This is similar to what in logic is called a conservative extension of a theory. This construct is necessary for an effective modular management of ontologies, but is not possible with the current way RDF/OWL treats it.

In first order logic the conservative extension of a property can be expressed as follows. Assume that A and C are subclasses of B and D respectively and  that p, p’ are properties between A,C and B, D respectively:

If p’ is a conservative extention of p then

In the 41st joined meeting of the CIDOC CRM SIG and ISO/TC46/SC4/WG9 and the 34th FRBR - CIDOC CRM Harmonization meeting, the sig reviewed the text about the logical theory provided by CEO. This text describes the scope of CRMbase and that of the extensions in terms of logic (e.g., as sets). The text is here

The sig decided the following:

In the 42nd joined meeting of the CIDOC CRM SIG and ISO/TC46/SC4/WG9 and the 35th FRBR - CIDOC CRM Harmonization meeting, it was decided that the HW provided by CEO regarding the conservative extension of the domain and range of properties of the crm, now listed under “Assistance for reducing to core CRM model” (Definition of the Definition of the CIDOC Conceptual Reference Model, version 6.2.4, pp. xviii-xix) should be renamed “Conservative Extension of the Scope of CIDOC CRM by Model Extensions”. The issue is closed, and any possible debates on concerning its title should be addressed through a new issue.